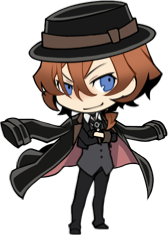 Who are Dazai and Chuuya?

Double Black（双黒, そうこく）is the heretofore undefeated partnership between Chuuya Nakahara and Osamu Dazai. Combining their ultra powerful Abilities, they bring out the best of each other's skills. Together, they have the power to annihiliate multiple enemy organisations in a single night. Alas, their clashing personalities undermine an otherwise flawless duo. No matter the situation, their meeting ends in bickering.

Despite their differences, each half of Double Black exerts a great deal of influence over the other. They grew up together. They honed their skills together. They were friends, rivals, and confidants. It's safe to say that, until their untimely separation, Dazai and Chuuya shaped one another's lives— and they're better off for it. After all, as their supervisor Mori Ougai once remarked, "only a diamond can polish a diamond."

Now, after years without contact, they fight on opposite sides of the city-wide conflict. The grudges they hold have thickened with the distance, their hostility rising to an all-time high... and yet I'm obsessed with them. Oh my God. I love their dynamic so much, I just want them to kiss... Oh my God....... 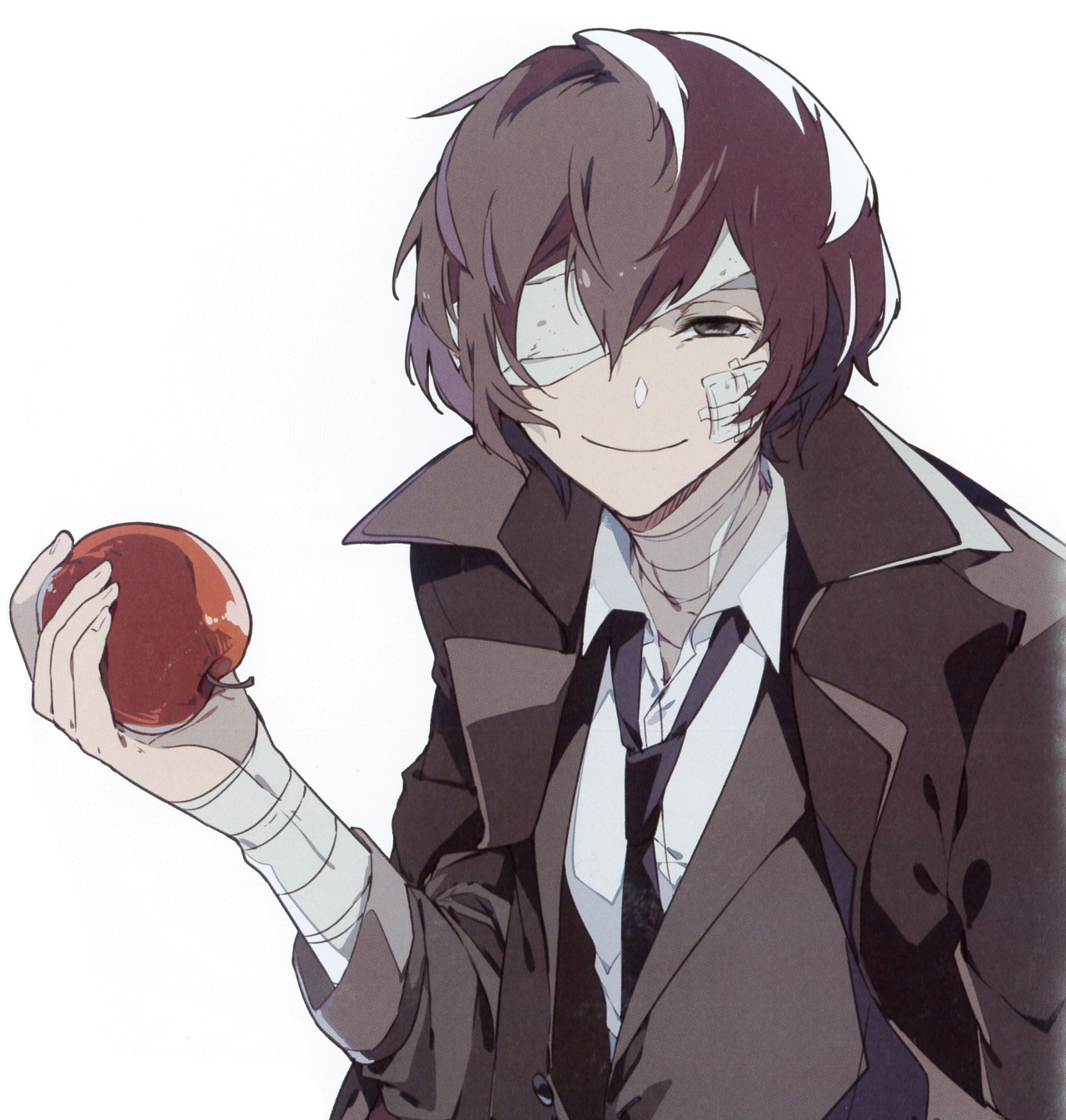 Osamu Dazai (太宰治, だざいおさむ) is a blackhole in the shape of a man. His Ability, No Longer Human, nullifies the Ability of anyone he touches, making him a fearful opponent for even the strongest of enemies. No one knows his history nor how he came to be one of the greatest threats in Ability-user warfare. Although his tactical skill is unmatched and his genius unquestionable, Dazai's severe emotional disturbances interfere with his work ethic and hinder his relationships. He prefers impulsive suicide attempts to important meetings. How irresponsible!

It's inconvenient for those forced to depend on him, surely. Fortunately for Dazai, an overwhelming apathy shields him from guilt. Everything in the world bores him to complete exhaustion, so he is able to live without a care, simply waiting to die. Ironically, his countless suicide attempts all end in failure. Poor thing... If I could, I would shoot him in the head myself. He's earned it.

That's because Osamu Dazai is a bad person. He is so bad at being a person, one might even say he is disqualified from humanity. To tally just a few of his crimes: 138 murders, 312 cases of extortion, 625 cases of fraud, and more. He is extremely manipulative and known to torment those close to him just for fun. Very few people can read his intentions or keep up with his smooth talking. In fact, his former subordinate, Ryuunosuke Akutagawa, asserts that even attempting to understand Dazai's thought process is a lost cause.

Despite all that, I really like Dazai! I think he's interesting, especially since I'm drawn to the misanthropic anti-hero type. He has a lot of duality, particularly as his character develops from tired, edgy teenager to fake-cheerful young adult. More than anything, he is fun to write about. His relationships, motivations, and fears are all incredibly compelling to me. I like his funny face, too.

The King of the Sheep 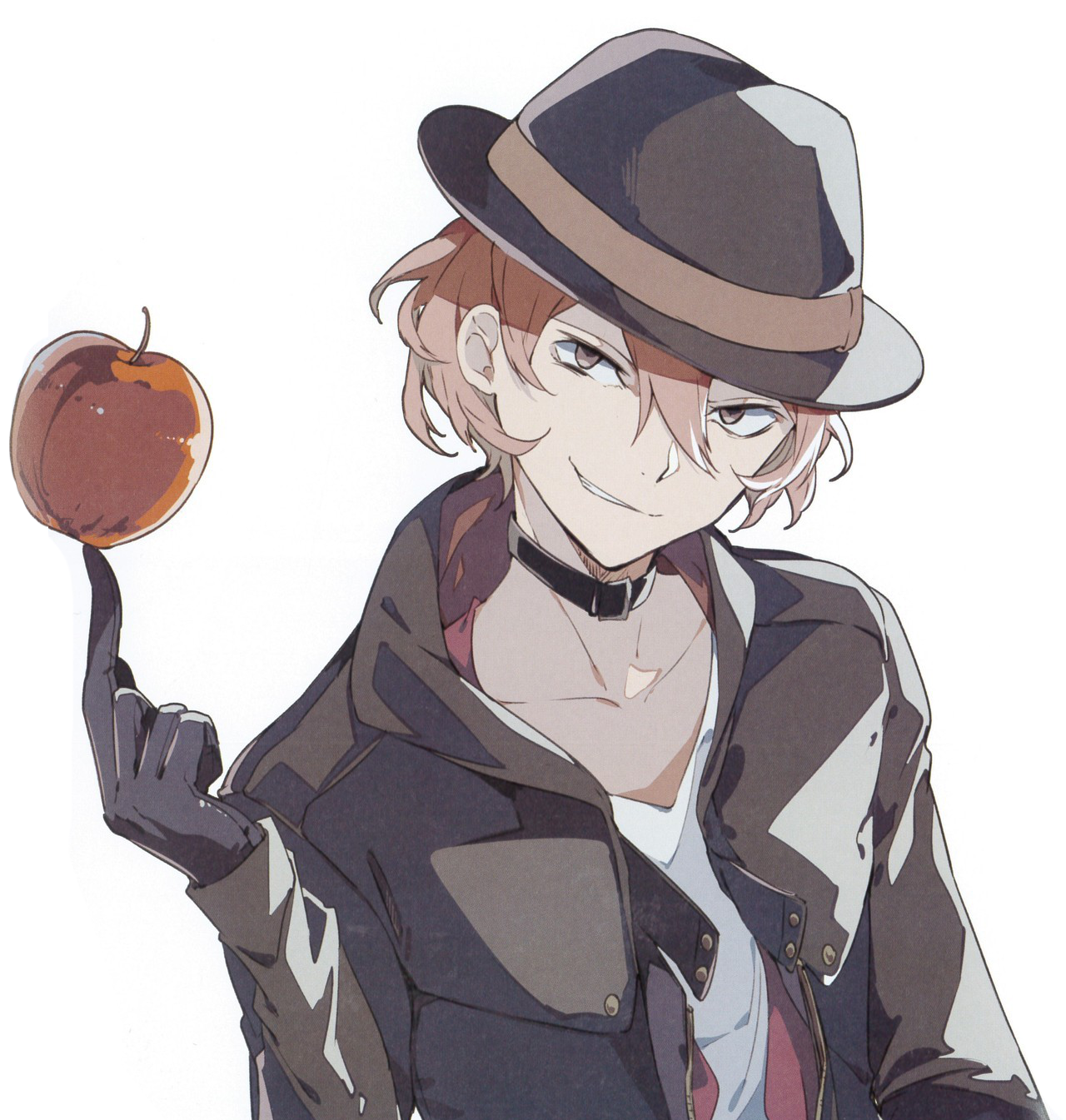 Chuuya Nakahara (中原中也, なかはらちゅうや) is the human name assumed by the ancient God of Calamity, Arahabaki (荒覇吐, アラハバキ). Understood only as a mysterious power source, Arahabaki was seized by the Japanese government in hopes of artificially manufacturing Ability users. During a breach of the research facility, it escaped confinement and rained hellfire upon the town until it merged with a 7 year-old test subject.

The Chuuya we know and love has no memories of the human life before this incident. He is simply an extra-dimensional being pulled forcefully into a world in which he considers himself an outsider. Shortly afterwards, he was adopted by a local street gang of fellow children who called themselves Sheep. Chuuya's ability, For the Tainted Sorrow, which allows him to manipulate gravity, made him a crucial asset for the otherwise powerless Sheep. Having never lost a single fight, he grew up to be ruthless and cocky— and fearful of his own inhumanity.

Despite his dramatic and crass personality, Chuuya is loyal, reliable, and surprisingly sentimental. He is a little slow on the uptake, especially when compared to geniuses like Dazai. I seriously doubt he knows how to do maths. Because he is too smug to back down from confrontation, he is dangerously easy to rile up. Those who plan to fight him need to have a trick up their sleeve. Otherwise, they'll be crushed to death without a second thought.

Personally, I love Chuuya because he is a weird little demi-god with identity issues and 5+ years of unrequited crushing on the worst man alive (see above). Science experiment backstories are always fun, too. Sadly, we don't see a lot of him in the original work even though he is arguably the most interesting character in the series. There's so much potential for nuance! Alas, fanfiction will have to suffice.

Before either of them spoke a single word to each other, Chuuya kicked Dazai in the stomach and sent him flying into a building. In their very first encounter they openly mocked and attempted to kill each other. These interactions set the pace for their relationship for years to come. Even when they were officially partnered as allies, the hostility remained. It only escalated after Dazai's betrayal. Time apart only made the hatred rushing to the surface that much more vitriolic.

But there's no avoiding it. If you spend enough time with someone, you'll get to know them better than anyone else. Dazai and Chuuya have three years of experience with each other. As a result, they have countless in-jokes and shared memories. Though Chuuya is the deadliest martial artist in the city, Dazai can easily dodge his attacks. Meanwhile, Dazai is still impossible to outmaneuver, yet Chuuya can immediately follow what he's planning. No matter how much they despise each other, this intimate knowledge is unforgettable. Even after years spent apart, they fall right back into their old routines, like two halves of a whole.

(fit in something about corruption in this section....)

What makes them so compelling?

Double Black compliment and contrast each other in very appealing ways. They are just similar enough to bond on a deep, empathetic level, yet different enough to support the other's deficiencies. Most importantly, despite their outward antagonism, they trust each other more than anyone else. Together, with their potential fully unlocked, they have the power to overcome any adversary. Only fools dare oppose the legendary Double Black!

Both of them have a boredom issue. While Dazai is aware that his extreme anhedonia manifests as suicidal depression and sadism, Chuuya seems more oblivious to his self-destructive tendencies. Because Chuuya is generally indestructable, he relishes in the chance to have an all-out brawl. He even fights with a handicap. He's desperate for someone to push him to the limit, to make him fear death for the first time and prove to himself his humanity. In the end, neither of them have much success in their externalised self-harm. Dazai lives another day. Arahabaki stays trapped in its shell.

What the two of them are so desperate for is a challenge. Luckily, Chuuya's brute strength and ceaseless determination overpowers Dazai's nullification ability. And while Dazai often fails to compete physically, his sharp mind gives him the final advantage over Chuuya to keep the altercation interesting. In all other areas, he is too witty, sneaky, and cunning for Chuuya to gain the lead. Thankfully, Chuuya is eager to escalate to physical violence to even the score. As such, they're left in eternal stalemate.

Yet neither seem to mind— why is that? Most give up on Dazai out of either frustration, disgust, or fear. He must be glad to have such a loyal plaything. Meanwhile, Chuuya gets both the rarity of an enemy who can evade him, and the familiarility of a long-despised target. In a world of people so far beneath them, they seize any chance to be kept on their toes.

Moreover, they seem to relish in getting on one another's nerves. In later canon, Dazai goes great lengths to annoy the hell out of everyone he meets, from pranks and practical jokes to outright insults. Just remember that it all began with Chuuya. I suspect Chuuya was his first taste of reciprocal friendship and Dazai now uses their relationship as a blueprint for all his other interactions, with mixed results.

After all, Chuuya is the perfect candidate for a teasing friendship. He's easily provoked, comical when angry, and quick to return fire. He has enough self-esteem to withstand a continuous barrage of attacks and not become disheartened. In fact, I'd argue he genuinely enjoys their dynamic. He must have fun talking so much shit, especially knowing there's no need to hold back around someone as heartless and apathetic as Dazai. There's nothing quite as refreshing as unconditional, scathing honesty.

The same cannot be said of Dazai's other friends and colleagues. It's unsurprising that so many of them openly dislike him when he is unscrupulous, irresonsible, and regularly mean. Most people simply aren't equipped to handle Dazai. Chuuya is the only person who can understand, tolerate, and compete with him all at once.

The part where they're different

Chuuya thrives when given orders. Though he was unarguably the most powerful member of Sheep, even earning the moniker King from those threatened by the gang, leadership disinterested him. His ambition is trumped by his loyalty every time. I suspect Chuuya doesn't care who's in charge as long as they'll let him show off. (Personlly, I like to imagine this compliance is leftover from personality conditioning performed on Chuuya as a test subject... But I digress.)

In contrast, Dazai thrives when he needn't lift a finger. Though he possesses several combat skills, including marksmanship, he is best utilised as a tactician. Although he outwits his enemies at lightning speed, oftentimes it requires a team of people to swiftly neutralise a large threat. Plus, No Longer Human is useful only against other Ability users. In any case, in an offensive position, he'll require support.

Clearly, this makes them an advantageous match. Dazai already playfully refers to Chuuya as his dog and loves to boss him around. Even though Chuuya resents it, he's knows firsthand that Dazai's plans are widely successful. After a little complaining, he'll go along with just about anything. The union is further bolstered by Chuuya's overwhelming physical strength. No one could ask for a more capable weapon. They fit together perfectly, like a bowie knife in a steady hand.

want to talk about

the nicknames and in-jokes should go here, hehe. and fun things like their height difference and complimentary colours...aaaa

What does DaChu mean to me?

(crying on the keyboard).. gonna talk about when i started to ship them and how much i appreciate their characters.also all my old fave songs that didnt fit any characters i liked are now all perfectly applicable to soukoku!!! is that not prophetic or what???